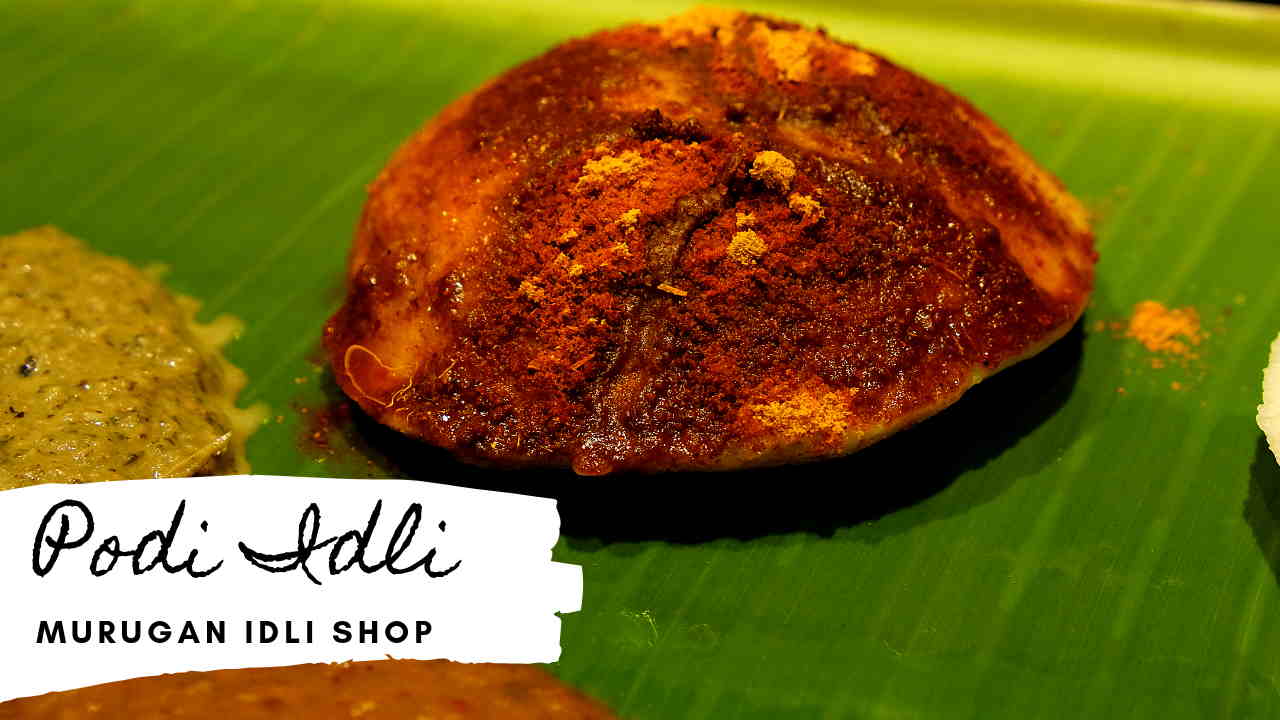 The main problem for beginners in Indian Cooking (even the experienced ones in some cases) is the challenge of getting the idli soft and fluffy. This is where the Murugan Idli Shop’s idli or podi idli scores big time.

I especially love the Podi Idli which melts in the mouth!

Today, I will show you the idli and podi idli that are the STAR dishes in Murugan Idli Kadai.

Plus the Murugan Idli Kadai Jigarthanda – a summer dessert drink.

What is Murugan Idli Shop?

Murugan Idli Shop, also known as, Murugan Idli Kadai, is a South Indian Cuisine based restaurant which has its origins in Madurai – The Food Capital of Tamil Nadu.

Murugan Idli Kadai is an Authentic and Traditional Tamil Nadu based restaurant which is famous for its Idli, Podi Idli, Medhu Vadai, Masal Vadai, White Paniyaram, Chutney Varieties, etc and many more items.

Murugan Idli Shop clearly stands out from other South Indian restaurants when it comes to the Fluffy Idli.

My craving for soft and fluffy idli is always satisfied in Murugan Idly Kadai 100% of the time, irrespective of the branches I’ve had! Their taste is consistent across the branches.

The same applies to my husband. He simply loves the Podi Idli – he just can’t stop with one! We both double down (even triple down!) on the podi idlis!

Our Journey to the Madurai’s Murugan Idli Shop

On that particular day, my husband and I had to catch train from Madurai to Chennai. We had ample time in hand before catching the train.

Our tummy was already full (because we had good non-veg food!).

But a small space was created in our tummy at the mere thought of Podi Idli!

So we decided to visit the nearest Murugan Idli Kadai in West Masi Street in Madurai.

It is a busy street with many commercial complexes like Jos Alukkas, Pothys on the opposite side of the road.

We booked an auto and rode past Madurai Meenakshiamman Temple, Famous Jigarthanda Shop, and arrived at the restaurant.

The first dish we ordered was (as you guessed) – the Idli and Podi idli.

The idlis were served along with Sambar (the leftmost one) and FOUR VARIETIES of Chutney!

If you are a beginner or someone who is not sure on how to get started in Indian Cooking, please click on the below links for STEP By STEP GUIDE.

These idlies are prepared by:

It is also believed that adding a little Beaten Rice (Aval) or Sago (Javvarisi) makes the idly fluffy and soft as a sponge.

The different varieties of chutney served were:

As you can see, the Podi Idli was very inviting. Even though we were not hungry on that day, the taste of podi idli made us finish the idli quicker than we expected.

The mix of idli podi and ghee gives a rich texture visually and aromatically.

And the best part is THE SOFTNESS and FLUFFINESS!

Tearing a small piece from the idly was a sensual experience! Taking the piece of idli, combining with all five varieties of chutney, then dipping into the sambar and then finally placing inside the mouth – the podi idli exploded in my mouth!!!.

No words can describe such an experience. The podi idli melts in your mouth and slips into the tummy even before you come out of the trance.

After all, the idly, chutney and sambar are the best inventions (or discoveries) in the Indian Food world.

On top of that, these idlis are steam boiled with very fewer ingredients – because of which the digestive system is not clouded. They are easily digested, don’t make you drowsy (usually felt after having non-veg).

Jigarthanda literally stands for “Cold Heart”. It means keeping ones body cool during peak summer. And Jigarthanda does that exactly.

This summer drink has its origins in the Famous Jigarthanda shop, at Vilakuthoon. It is undoubtedly the best Jigarthanda out there.

The main ingredients used in the Jigarthanda are:

The most famous branch is the one in Besant Nagar – very close to the sea.

Since we are now settled in Chennai, we usually visit this restaurant whenever we go out to the beach.

Another best thing about this restaurant is that the waiters carry the Podi Idli, Onion Uthappam and Vadas with them, all the time.

You just simply sit in your place and get the piping hot dishes right in your plate, without disturbing your food experience!

Anyone who would like to know the REAL taste of South Indian Cuisine, especially the Tamil Nadu ones, Murugan Idli Shop MUST be in your TO-DO List!

Especially, the Idlis are the best ones on the planet!

(Click on the above to enjoy the mouth-watering Madurai Jigarthanda!!!)

(Click on the above to explore the ancient and traditional cast iron cookwares from Madurai!!!)

(Click on the above to know about the BEST Biryani in Bangalore!)

(Click on the above to explore the BEST Benne Dosa in Bangalore!)

(Click on the above to explore the different varieties of Obbattu in Bangalore!)

(Click on the above to explore the Bisi Bele Bath, Rava Idly in Bangalore!)

(Click on the above to dive into the Mouth Watering experience of the Dark Chocolate in Bangalore!) 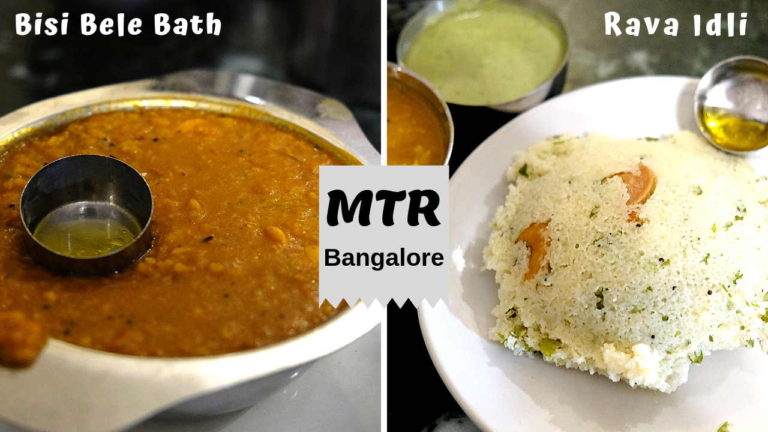 What is Mavalli Tiffin Room? Mavalli Tiffin Room, most commonly known as “MTR” is a veg based restaurant in the Indian City of Bengaluru, located on the Lal Bagh road. It is one of those authentic and traditional South Indian restaurants, where you find veg dishes like bisi bele bath, masala dosa, rava idli, chandrahara,… 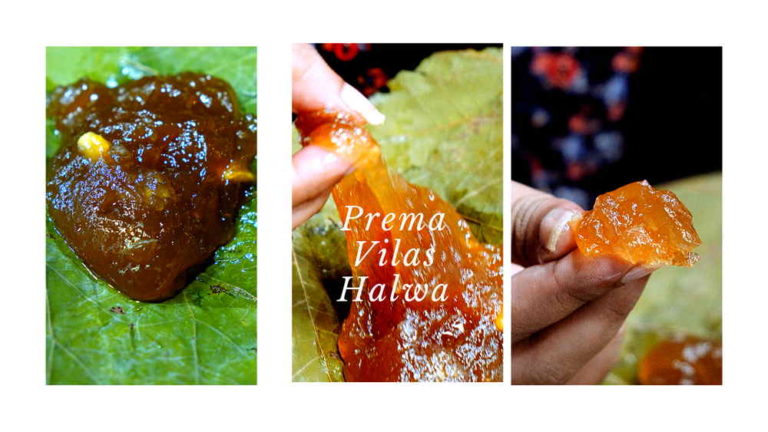 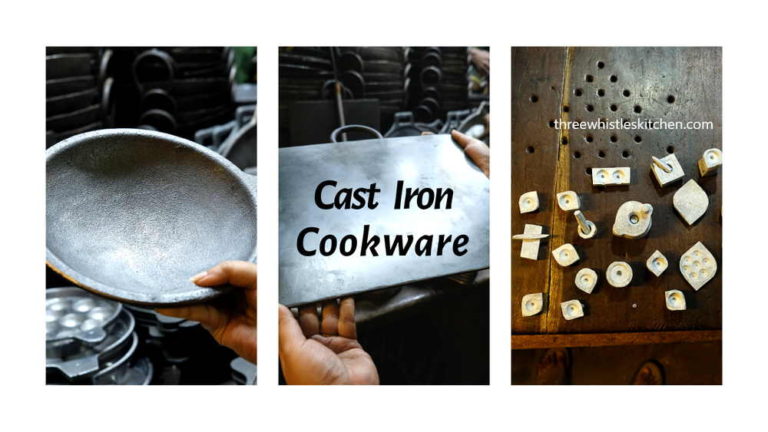 Journey into the Ancient Indian City – Iron/Cast Iron Cookware Shops Instead of buying organic cookwares from online, we decided to visit one of the oldest and best in the business iron vessels shop in Madurai. This shop is in PudhuMandapam – near Madurai Meenakshiamman Temple (an Ancient Historic Temple known for its architecture and… 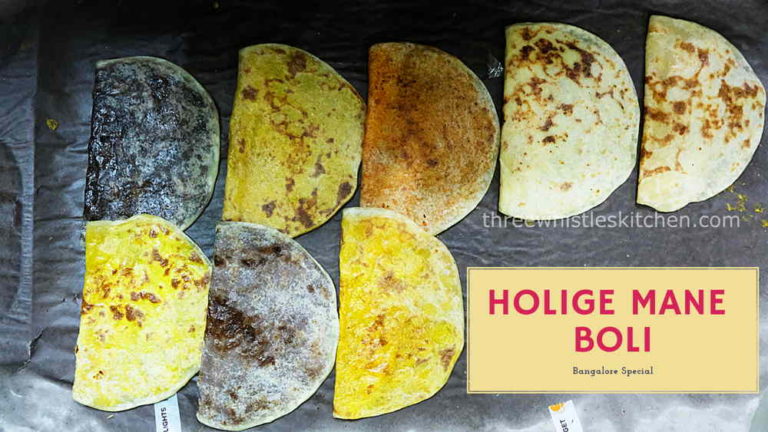 What is Holige Mane? Holige is a sweet flatbread. It is known by several names in India like: Mane – Home. Holige Mane literally translates to “Home of Boli”. When we entered the Holige shop ( “Holige Mane” at Malleshwaram, Bangalore (India) ), a pleasant aroma of the boli heightened our taste buds! On top… 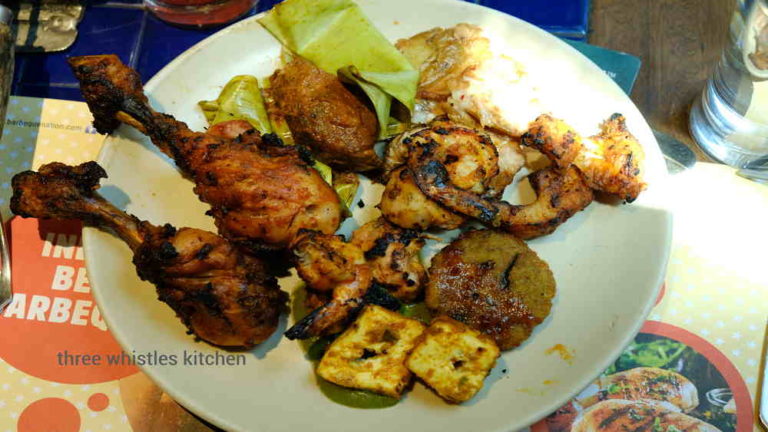 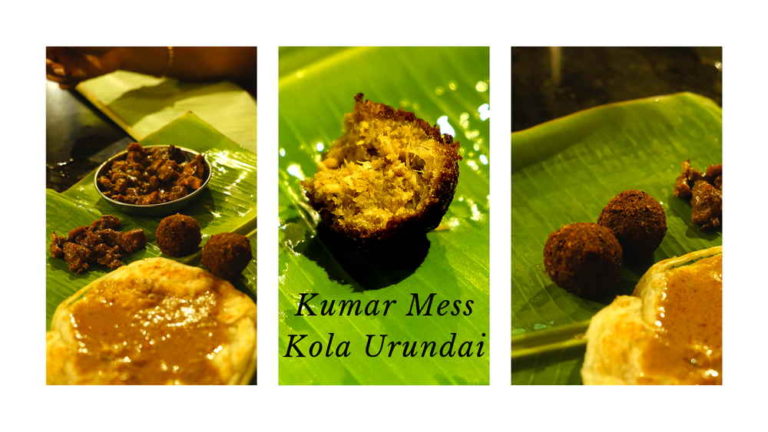 Madurai Kumar Mess Kumar Mess is a Non-Veg Restaurant, famous for its Mutton Kola Urundai, based out of Madurai (Tamil Nadu). It was started around 1991 as a small venture and then later expanded to many branches in Madurai and Chennai over the years because of its popularity and signature dishes like mutton keema balls….